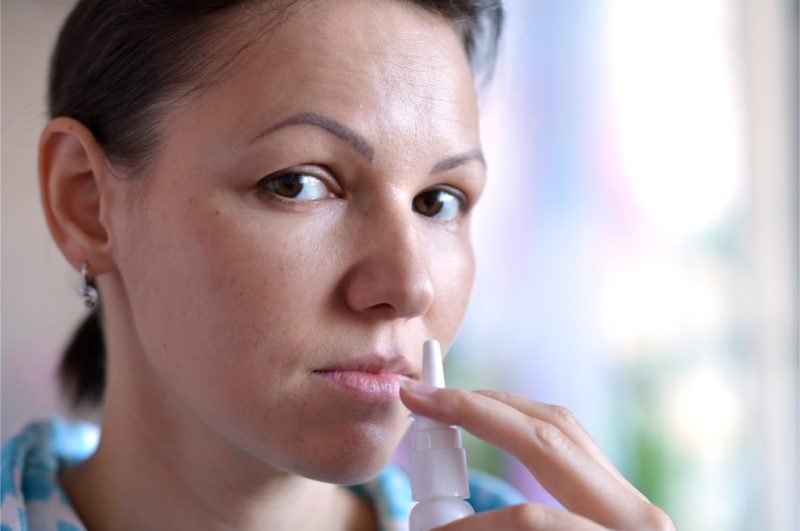 Dependency on decongestant nasal sprays is a widespread, yet not very visible, problem. Most users are unaware that nasal sprays containing xylometazoline or oxymetazoline should not be used for longer than a week. These decongestant sprays are, however, freely available as over-the-counter drugs. In consequence of this wide availability, the public seems to be less aware of the dangers in long-term (over)use. Unawareness may also arise when users do not carefully read the package leaflet information.

In a number of European countries, these decongestant sprays are available only on prescription. In these countries, addiction to nasal sprays is rare.

The causes of nasal spray dependency

Decongestant nasal sprays contain the active ingredient xylometazoline or oxymetazoline. These compounds shrink swollen nasal membranes by constricting the tiny blood vessels within them, thereby relieving a stuffy, blocked nose. They, however, also cause a rebound effect: after a while, the blood vessels widen again, the nasal mucus membranes swells and the nose becomes blocked again.

As a consequence, the user continues to spray in order to get rid of the stuffy nose and to breathe freely. When the nasal spray is used for a longer period, dependency arises. When xylometazoline is not administered frequently, the nose will remain congested. The inability to breathe freely is highly uncomfortable and causes many users to continue their use. Addiction to nasal sprays then arises.

You can recognise a nasal spray addiction by a prolonged period of use spanning more than two weeks. As a nasal spray dependent, you may need a squirt each night before sleep. Or you have a bottle near you throughout the day. Without the spray, your nose becomes congested and you are unable to breathe freely.

The use of xylometazoline damages the cilia and membranes. The cilia in the nasal cavity, however, form an important barrier against viral infections such as the common cold. When this barrier is affected, you are more likely to suffer more cold symptoms.

Getting rid of nasal spray addiction

Nasal spray dependency can be helped easily. One method is to quit usage of the spray cold turkey. This gives the blood vessels the opportunity to recover. The nasal membrane, in turn, swells up less and less. The sense of congestion also disappears. For most people, however, this method is far from ideal because they experience much discomfort during the recovery period.

Another method is to wean oneself off one nostril at a time. This method allows for easy breathing through at least one nostril. This will not work for everyone, however. You just want to be able to breathe through both nostrils.

If you suffer chronic stuffiness caused by sinus problems or allergies, neither method will be successful. Your dependency on nasal spray may be gone, but the symptoms remain.
In order to fix nasal discomfort, try Capsinol.

If you suffer chronic nasal congestion, Capsinol nasal spray may provide the solution to your problems. Capsinol consists entirely of natural ingredients and you can safely use it for a longer period without causing damage to your nose.

The capsaicin in Capsinol nasal spray blocks the overactive nervous system and, in turn, reduces the production of mucus. Capsaicin also works as an anti-inflammatory and increases resistance of the mucus membranes. This will make the nose less sensitive to external factors that cause colds. This effect remains for up to a year and will allow you to breathe freely through your nose.

Medical research has shown that capsaicin is effective for relieving chronic nasal congestion and that it does not have any negative effects. The sense of smell remains (it may even get better) and nasal mucus membranes are not affected, even when the spray is used for a longer period. In addition, you will develop no dependency on or addiction to capsaicin.

Most people use Capsinol for a period of time, until they are free from congestive symptoms. The symptoms may then stay away for some time (on average, one year). This may differ from person to person. While one may need no more than a single bottle of Capsinol spray, another may continue to use it regularly. In some cases, it may not work at all: not every nose responds to the pepper in the spray.

Considering the positive results, Capsinol is definitely worth a try if you want to kick your nasal spray habit.