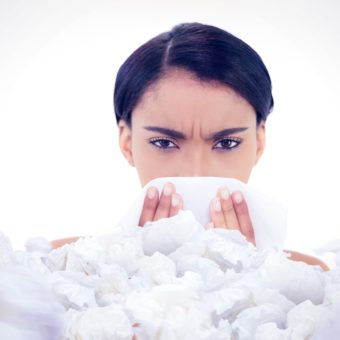 What is a runny nose?

A runny nose is especially annoying. Everyone has had to deal with it. The nose keeps dripping continuously and therefore you have to blow your nose every time. There is a layer of mucous membranes on the inside of the nose and these are covered with fine hairs. The hairs filter the air we breathe. The nasal mucous membranes always produce a little moisture, but are they inflamed or irritated? Then the mucous membrane produces more moisture than usual. This moisture, a light and cloudy discharge, then flows out of the nose. With a runny nose as a result.

How does a runny nose develop?

A runny nose can be caused by many different causes. Here we give a list of causes that you can think about.

Whatever the cause, the nose is irritated. This causes nasal mucous membranes to swell and more moisture is produced. This moisture runs out of the nose; this creates a runny nose.

There are also people who suffer from a chronic runny nose (vasomotor rhinitis). There is then a disturbance in the nasal mucous membranes. This is often due to hypersensitivity to a certain substance, such as an allergy or random dust particles in the air.

Many elderly people can also suffer from a runny nose. When we get older, certain processes in the body work less well. For example, the vascular tension of the blood vessels in the nose can be reduced, causing it to become more irritated. The blood vessels can also become a little porous. This releases moisture which drips from the nose. This can lead to a chronic runny nose.

How do you fix a runny nose?

The small, short-lived runny noses quickly resolve on their own. Like when you stop exercising or go back to the heat. After half an hour the complaints usually disappear.

But what if it lasts longer? A runny nose is very annoying and everyone wants to get rid of it as quickly as possible. We give a few tips:

Capsinol for a continuous runny nose

Note: Capsinol is a spicy nasal spray, which can take some getting used to. In addition, it has a constructive effect. It can take a few days to two weeks for a really good result to be achieved. If no difference has occurred after two weeks, there is a good chance that Capsinol will not offer a solution for you. Sometimes the mucous membranes do not respond to the stimulus of the pepper.

The fact is that it does help a lot of people. Often with a long-term positive result.

Which Capsinol Formula is right for me?

Do you prefer to buy Capsinol in the store? Find a store near you.