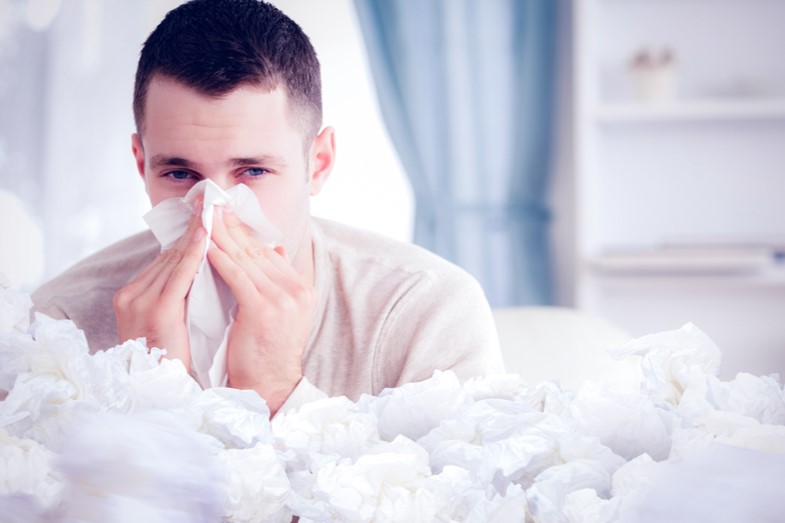 A congested nose – almost everyone has it sometimes. Whereas one person may experience it occasionally, another may continually suffer a (chronically) congested nose. Nasal congestion arises when the nasal mucosa swell and the production of mucous increases. The nose then becomes stuffy.

Causes of a blocked nose
Swelling of the nasal membranes can arise due to a variety of causes. One possible cause is the cold virus. Because this is frequently the cause of nasal congestion, people often say that they ‘have a cold’ when their nose is blocked. This is does not mean, however, that the common cold is in fact causing their nasal congestion. Other factors may in fact cause a stuffy nose, such as allergies, hay fever or hypersensitivity of the nasal mucous membranes.

The virus causing the common cold is most active during the fall and winter. The cold generally lasts for a short period of time, and nasal congestion is generally automatically relieved after a few days. In order to relieve symptoms immediately, nasal sprays containing xylometazoline or oxymetazoline are often used. These sprays decrease the swelling of the nasal membranes and one is quickly able to breathe freely again. If these sprays are not used for more than 5 to 7 days, they may be used safely and effectively.

If the cold lasts for more than seven days, change to Capsinol nasal spray. Whereas xylometazoline and oxymetazoline only alleviate symptoms, Capsinol attacks the root of the problem.

Also, if you prefer natural over chemical products, Capsinol is right for you.

Capsinol provides relief to blocked noses and frees it from mucous (or snot). Compared to nasal sprays containing xylometazoline or oxymetazoline, it may take a little longer before one notices Capsinols effectiveness. The major difference between these two sprays, however, is that Capsinol actually attacks the root causes, whereas xylometazoline and oxymetazoline only help to alleviate the symptoms of a congested nose. When these nasal sprays are used for longer than 7 days, the nose may even grow increasingly dependent on the administration of xylometazoline or oxymetazoline (see: nasal spray addiction). Capsinol may be used for a longer period of time and eventually will only have to be used less and less.

Many people have allergies. They may be allergic to cat or dog hairs, dust mites or pollen. Capsinol does not solve the problem of the allergy itself. It does, however, help to alleviate symptoms such as a stuffy nose.

We recommend Capsinol mild formula for hay fever. This formula contains feverfew (a medicinal herb), which is said to have a positive effect on hay fever symptoms.

Apart from a viral infection or allergy, a blocked nose may also be caused by a hypersensitivity of the nasal membranes without a clearly identifiable cause. In this case, the nose reacts directly to inhaled substances without allergies as an underlying cause. Due to this hypersensitivity, one often suffers from chronic nasal problems such as a blocked nose or a runny nose. This can also spread to the sinuses, causing sinus infection or frontal sinusitis.

In case of this hypersensitivity (‘idiopathic rhinitis’ in medical jargon), Capsinol can provide a real solution. The capsaicin (an active substance in hot pepper) in Capsinol causes the nasal mucous membranes to become less sensitive to external substances that come into touch with them. It has an anti-inflammatory effect and causes the nasal membranes to become more resistant. The pepper stimulates the nose to react defensively and thereby ‘teaches’ it to resolve nasal problems by itself. The nose will become less sensitive to external influences and will not congest as easily anymore.

If Capsinol is effective, you will not need to use nasal spray for a longer period of time. Your chronically congested nose will be a thing of the past. This congestion-free period my last up to a year (or even longer).

The effect does, however, differ from nose to nose. Whereas Capsinol provides a long-term solution for some, others may have to keep using it regularly. And yet others may, unfortunately, experience no effect from the hot pepper at all. It is impossible to tell beforehand what the effect will be.

We do know, however, that a lot of people have benefited from Capsinol. These people have finally discovered a solution to nasal problems they had been suffering from for years.